Here are a few simple steps for entering a temple and the sequences for paying respect to the Deities in a temple (according to their Ranking/Position).

In-order to allow you to have a clearer vision on the steps being listed here, I have come out with 2 simple illustrations on the Floor-plan of 2 types of temple layout (this will varies as different temples have different layout, but the sequences cannot be change). 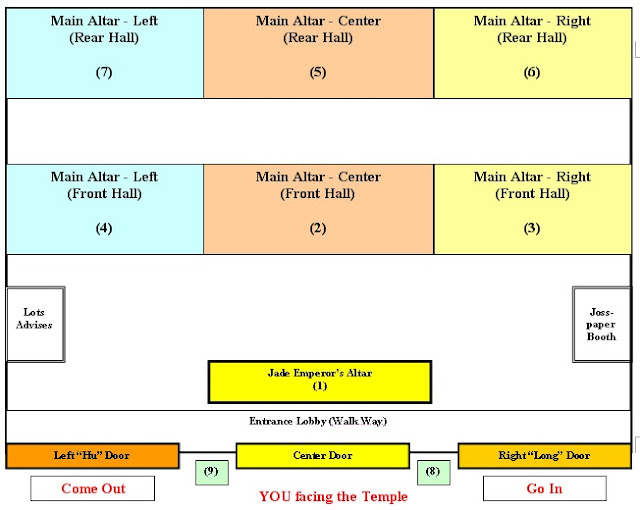 Upon reaching a Temple, before you enter into the Temple, simply make a simple Bow to the temple (if there’s a Jade Emperor Urn outside, always Bow to the Heaven before entering).

While you entering into a temple, always used the Right Door (so-called Dragon Gate).

Entering from Dragon Gate as to request the blessing from the Deities and also to so-called "cleanse" oneself physical body/mind/soul.

Usually you can see the Joss-paper Booth near to the Dragon Gate (a “sign” for you to remember which is Dragon Gate).

After purchasing of the Joss-set, always place the Bigger-size Joss-paper (Jade Emperor’s KIM - Gems) at the altar that dedicated to Jade Emperor and the other at the main-altar inside the temple.

Upon doing that, light your incenses and candles at the Jade Emperor’s Altar (if the temple set another area for lighting, that will be more perfect).

NOTE: never light your incenses or candles at the 7-Stars Lamp.

After placing the candles into the holders, start your paying respect with the incenses that you have lighted.

Always pay your respect to the Heaven (or Jade Emperor in Folks Temple) first before proceeding into the temple.

According to the "Standard Rules of the Sequences of Paying Respect (Wu Lun)" passed-down from the Ancient Time, Heaven/Earth comes before Emperors, Emperors come before Parents, Parents come before Teachers/Masters. And so the sequences cannot be mix-up or jumble-up

After paying your respect, always used your Left hand (Yang) to place the incenses into the Urn (Incense Holder).

And then proceed into the Temple, using the Dragon Gate.

Upon entering into the temple, pay your respect to the Main Deities of the Temple at the Main Altar dedicated to them.

Followed by the Right-Altar (Point 3).

Followed by the Left-Altar (Point 4).

If the temple got a Rear Hall, then proceed to the Rear Hall to pay your respect to the Deities inside there (see illustration Format One).

If the temple dedicated any Side-Altars to any of the Deities, then always proceed to the Right-Side-Altar first before proceeding to the next (see illustration Format Two).

Only after all the paying respect within the inner compound of the temple, then we proceed outside to pay respect to the Guardian Deities – Door Deities, Commander Deities, Tiger Deities, Earth Deities, etc (see point 8&9 in Format One or 7&8 in Format Two).

After all paying respect to all the Deities in the temple, proceed with the offering of the Joss-paper (Incense-paper) .

Before doing the offering, simply make a simple Bow, together with the Joss-paper, in-front of the Main Altar (no need to go round the whole temple), after that, proceed with the offering (burning).

Before leaving the temple, if possible, try to do some donation to the temple, show your gratitude to the keepers that helped to maintain the temple and continuing the culture of our Chinese Deities (no need BIG amount, sincerity counts).

Exit from the Left Door (Tiger Gate) of the temple.

After going out from the temple, some people will practised not to look back or make any more respect to the Deities, this is up to individual.

But one thing in common, never SHOW your rear-side (buttock) directly in-front of the Deities (while you walking out), this considered as Dis-respect.
Posted by 陳李吳大孝 Jave Wu at 03:44